Mr. Cheng has been appointed a mediator and arbitrator to several private and public rosters, including the following:

Mr. Cheng serves on the Council of the American Arbitration Association. He is also the President of the Justice Marie L. Garibaldi American Inn of Court for ADR, a Past Chair of the New York State Bar Association Dispute Resolution Section, and the Treasurer of the Copyright Society.

Representative matters as a MEDIATOR include:

Representative matters as an ARBITRATOR include:

For over 20 years, Mr. Cheng was an intellectual property and general commercial litigator with a focus on trademarks, copyrights, patents, and trade secrets, as well as entertainment, labor and employment, corporate investigations, securities, and bankruptcy. He handled a broad array of business disputes in federal and state courts in industries as varied as high-tech, telecommunications, entertainment (music and motion pictures), consumer products, food and hospitality, retail, and financial services. In 2007, he was named one of the Best Lawyers Under 40 by the National Asian Pacific American Bar Association.

Mr. Cheng was previously a marketing consultant at MetLife Insurance Company, with experience in life and health insurance, annuities, brokerage sales, structured settlements, and investments. During his tenure, he obtained his Chartered Life Underwriter (CLU), Chartered Financial Consultant (ChFC), and Series 7 General Securities Representative designations. Mr. Cheng also previously served as a law clerk to the Honorable Julio M. Fuentes of the U.S. Court of Appeals for the Third Circuit and the Honorable Ronald L. Buckwalter of the U.S. District Court for the Eastern District of Pennsylvania. 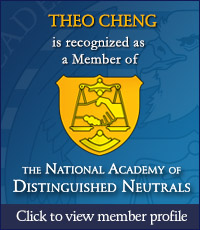